For the Reckord | Busy year ahead for the Philip Sherlock Centre 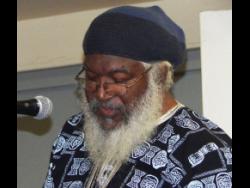 “The show is being staged during the lunch hour to attract [primarily] the university’s students,” head of the PSCCA, Michael Holgate, told The Gleaner. He said that much of the material to be used by the groups will be selected from Miss Lou’s published prose and poetry.

That production is only one of many that Holgate and his team have planned for the centre during the current academic year. The team includes administrator Deby-Ann Stern, Technical Manager Nadia Roxburgh, and admin/production assistants Thadesia Clarke and Rosini Robinson.

Another big event, set for October 11-13, is the inaugural staging of the annual Philip Sherlock Centre Heritage Month Celebration. This year, it will take the form of a theatre festival showcasing young theatre directors and writers in honour of Dr Brian Heap’s contributions to theatre at the centre.

Among other things, Dr Heap, the recently retired head of the PSCCA, kept the Tallawah Tertiary Drama Competition going for decades, and out of it has come many performing arts groups and directors. Some of those directors will be taking part in the theatre festival, which will comprise three nights of half-hour shows coordinated by Rayon McLean, a director whose group, Quilt Performing Arts Company, is itself a Tallawah offspring.

This year’s Tallawah will be held from November 6-10. Prior to that, from October 25-27, the University Singers will stage their mini season.

A new event begun in 2018, the 70th anniversary year for the university and the 50th for the PSCCA, was the Research Theatre Series, which featured productions by four performing groups under the title Ancestry. The shows highlighted research being carried out by the participating groups around issues of blackness and identity.

The series will continue in 2020 with a new twist. “It has always been a concern of mine that so much valuable research takes place at The UWI and not much of it gets out into the society,” Holgate told me. He’s doing something about it.

“I’ll be creating productions in different formats – one-woman or two-person shows et cetera – around university lecturers/researchers, doing whatever needs to be done to communicate the research material. Even our university students often don’t have access to it, and I’ve made it a personal goal to get the stuff out there in a way that’s interesting and accessible to the ordinary person.”

Holgate will direct the productions, which he sees involving singers, dancers and actors in a live theatre experience with original music. He has gotten affirmative responses for the project from various researchers, including Drs Rupert Lewis, Maureen Warner-Lewis, Clinton Hutton and Karen Carpenter, and is now busy designing the appropriate formats to reflect the varied material coming from the researchers.

Looking further into the future, Holgate said, “Over the next few years, I am looking forward to a refinement of the centre’s mandate and communication of that mandate. I am hoping this will help all our partners and stakeholders to feel more invested and better identify ways they can both support the centre and partake in the activities.

“We will continue to strengthen and develop the centre along four main tracks: production, training, research and publication, and service.”

Holgate said that the productions of the University Players are usually heavily researched, and plans are afoot to revive the Arts Review and the magazines. Service to The UWI and the community at large by the 10 PSCCA clubs and societies, as well as the activities of staff and students continues, Holgate said.

The PSCCA’s 10 creative arts clubs and societies use the facility for rehearsals, exhibitions, performances and meetings. Members come from all the university’s faculties and include both commuting and residential students.