STAR of the Month: Shane O shows off cooking skills 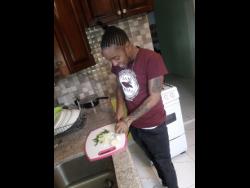 As the saying goes, ‘good things come to those who wait’, and in this case, THE STAR waited to see if the saying was true as STAR of the Month Shane O tried to show off some skills in the kitchen.

Even though he admitted that he was not a fan of cooking, he highlighted that he would prepare his favourite meal for the team. He said that he likes salt fish with ground provisions and dumplings.

Like many others, he started by kneading the flour into a dough.

According to him, dumplings are nothing without cornmeal, as it is a vital part of the dumpling-making process.

“Mi haffi use cornmeal because it make the flour hard and you know we a man. We can’t take the white flour business,” he said.

Hesitant to display his cooking abilities, there was a lot of excitement when one of his friends saw him in the kitchen.

However, that did not deter him.

He explained that the meal is not hard to prepare and it is a better meal than one that contains chicken.

“I eat chicken, enuh, but this is healthier,” he said.

After making the dumplings, Shane O lit the stove and got the pot of water bubbling.

With the help of Nazine, he washed the salt fish, peeled the bananas and yam, before putting it in them in the pot to boil.

Not priding himself as a great cook, the Last Days artiste said that he got most of his cooking skills from his grandmother, Gwendolyn Clarke.

“A mi granny teach mi how to cook, enuh. This meal a the better way for you. Mi can cook chicken, a just the beef and pork, you know the harder meat dem mi can’t cook,” he said.

With Shane O often disappearing from the kitchen, Nazine had to finish what he started.

Nazine wasted no time in getting the ‘salt ting’ ready.

Soon, the aroma of onion, hot pepper, tomato and sweet pepper filled the air, and mouths were watering.

There was all smiles when the meal was complete and ready to be served.

However, the smiles quickly tuned into laughter when everyone discovered that the meal was a bit salty.

Laughter again erupted in the kitchen when Nazine came to the rescue and made everything good again by adding water to the pot and leaving it to simmer.

In the end, everyone enjoyed the meal that was prepared.

Xodus has the Remedy – Ready to claim ‘baddest band’ title